Since we had two nights in St Ives, there was a free day to do a bit of a tour around the peninsula and we headed vaguely for Land’s End, with a couple of recommendations for other pretty spots. We got such a lovely day for it, a bit hazy but blue sky and a fresh breeze. The famous sign was predictably surrounded by all the usual trappings of a tourist spot but we were happy enough since that meant a pasty for lunch ;) It ended up working out fairly well that I was stuck with the 100mm since there was a fence around the sign and you had to pay to have your photo taken right next to it… 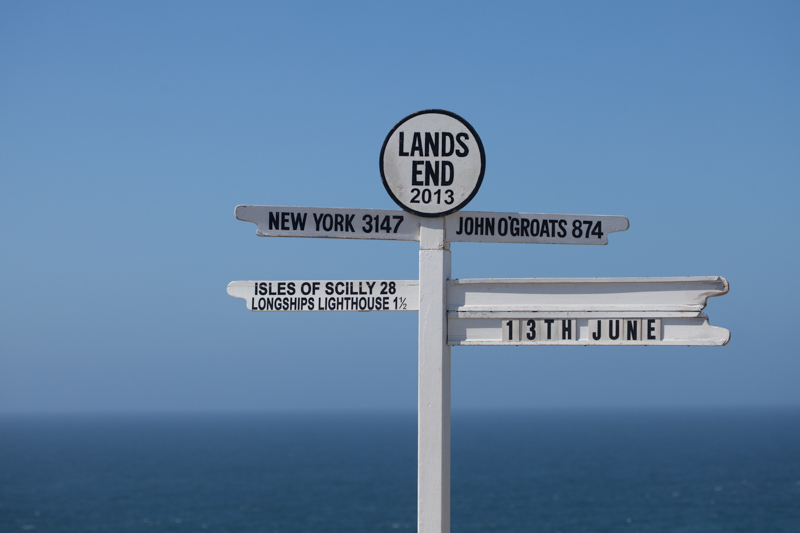 I did also grab a shot with the Instax that I think is pretty nice though. It seems to like blue and white. I should get around to scanning it :/

Love it when you can stare out to sea like this :) My friend had recommended a place to visit that sounded a little strange but when we got there, we realised why it was worth visiting. At Minack Theatre, you can watch a play with the fabulous backdrop of the birds swooping and diving and waves crashing behind the stage. There was something a bit bizarre about seeing the sound and lighting rig in such low tech surroundings, it’s quite an advancement compared to the car headlights that were used for the very first performance there. The story behind how the theatre was created and maintained, it’s worth having a nosy at google maps streetview and then reading up on the website. It was a fantastic place to visit and I hope one day I might even get to see a play there. On the way back around, we stopped for a quick look at the Cornish counterpart of Mont Saint Michel. It’s a wee bit smaller than the one in Normandy though! Now that was a day with enough sunshine and blue skies to make up for the drizzle we’d had.