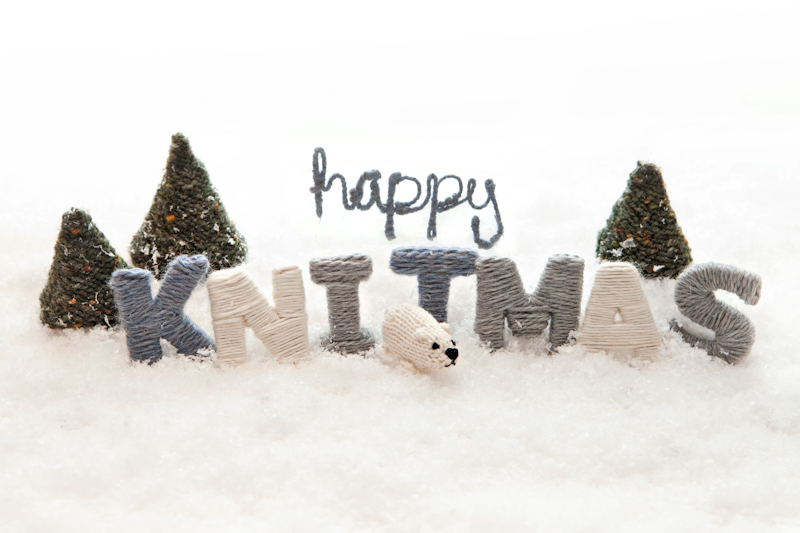 I’ve had this wee plan forming in my head for at least a couple of months now, but finally at the knit & stitch show i managed to get my hands on some little wooden letters of the right size and today, I sat down with them, and some double sided tape, and some scraps of yarn, and started to make it happen.

Much swearing later, as well as a couple of blobs of hot glue on my fingers, i set it up and started taking a few shots. I originally planned to shoot it in front of the window with the sky in the background but even though we’re on the 6th floor, those pesky buildings outside persisted in poking their heads into the frame, grrr. I went to plan B which was using a plain wall as a backdrop, where i taped some fairy lights up so they would go all nice and round and out of focus in the background. But between the masking tape letting the lights go and the cable showing up, it just didn’t want to happen. Plan C and Ryan came to the rescue with some off camera flash – off camera and held above the scene by him (I’m just not tall enough!) to blow out the wall and it felt like we were finally getting somewhere. Except I wasn’t happy. Well, more specifically, I had no happy – I just had knitmas. So I set about making myself a happy, with wire and pliers and Louisa Harding’s Rossetti, and a smidge of superglue (more precise than the glue gun). That’s what was missing, and here it is.

I’m still not sure this is the final draft, I’d like a bit more texture in the snow, I’d like the background a bit less artificial looking, and I need a bit more definition in the cream coloured letters against the white snow but I’m fairly chuffed with how far it’s come in the time I’ve been working on it.

So, keep an eye out for a happy knitmas card soon ;)