To be honest I wasn’t really expecting very much of Reims at all, maybe because I’d never heard of it until we started doing our itinerary, and maybe because I feel very silly when I try to pronounce it properly. It’s impossible to say with only a slight french accent in the middle of an otherwise scottish sentence, if you’re going to say it you have to go all out: rrgghhaaannmmgzzz. That’s my interpretation anyway.

I’ll save the actual champagne house tour for the next post. The city itself was surprisingly pretty, with a seriously impressive cathedral. Of course, I didn’t bring out my camera the day we went in and had beautiful blue skies and sunshine streaming through the stained glass. I brough my camera along the next day, when it decided to be drizzly mcdrizzle. But it did give me an excuse to buy a blue & white polka dot umbrella (which we brought back strapped to the side of the bike, very amusing), and take pictures of reflections in puddles as we sat with our breakfast coffee under a striped canopy. The coffee, by the way was the closest I got to a cappuccino – it was an attempt at an espresso which was served with a tiny jug of steamed milk but I was sorely disappointed, mostly because the milk in france is awful long life stuff. Those cows in all the fields, what are they doing with them, if not producing milk? Ah well, the pastry made up for it :) 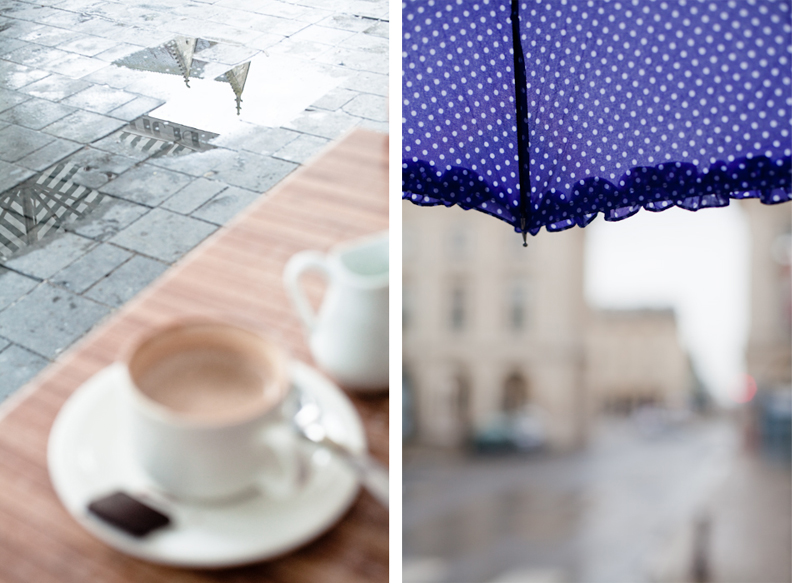 On sunday we had a wander around the lonely streets which had been crowded with tourists the night before. Unfortunately, the shops were mostly closed or I may have brought this little creature home with me… look at that little face! On our way back from our champagne tasting we detoured through a fairly old graveyard, very much along the lines of Glasnevin here in Dublin although probably a quarter of the size. It was quite atmospheric in the rain. We saw a few graves with recognisable names on them, from the families of the big champagne houses. It was quite a novelty seeing all the inscriptions in french, it made it more poetic somehow… or maybe I’d just let the bubbles go to my head ;)

for the love of bubbles »
« picky

2 Responses to champagne and rain